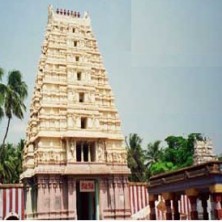 Saturn or Lord Shaneeswar in Swayambu form is the presiding deity at the temple in  Kuchanur and is known as Kuchanooran. The temple is located on the banks of the river Surabhi at Kuchanoor in Theni District of Tamilnadu. In most temples Lord Shani in seen with the other Navagrahas while here is present in a seperate shrine. According to a legend, King Dinakaran of "Kulinga"  was advised by his son Chandravathana that he was suffering from Sade Sathi(seven and a half-years) which could be overcome by praying to the Lord.  Chandravathanan performed penance in the forest and the lord impressed by his devotees's prayer appeared before him here.