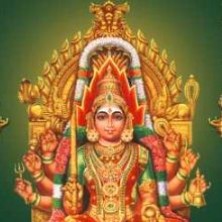 The Maariamman Temple at Samayapuram in the vicinity of Tiruchirappalli (see below), is one of the well visited shrines in Tamilnadu, dedicated to Maariamman, a manifestation of the primeval energy Shakti as the mother Goddess. Local variations of the worship of Shakti, the mother Goddess are seen throughout the Indian subcontinent. Mariamman is a form of Shakti worshipped in Tamilnadu, and is associated with prosperity and health. Local beliefs associate this deity with cures for diseases such as small pox and chicken pox.

Legend has it that Shiva created Kali, out of the poison that he had swallowed, and decreed that he kill Daarukaasuran. Having originated from the Kaalakoota poison, she assumed the name Kaali. Mariamman is believed to be a form of Kaali, and is also known as Mahamaayi or Seethala Gowri. Samayapuram was a local capital of the Vijayanagar rulers in the vicinity of Tiruchirappalli, and was known as Vikramapuram. This temple has separate shrines for the processional image of Mariamman and the moolavar in the sanctum. There is also a shrine to Karuppannasaami a local deity.

Another interesting story about the origins of the temple describes an ivory idol of Mariamman being brought in procession by a king of Vijayanagar. The procession halted for a break at this location. When they wanted to proceed after resting they could not move the idol and hence left it there. This place was Samayapuram.

For 28 days in a year the Goddess is not offered cooked food as she fasts for the sake of the world. She is offered only tender coconut and buttermilk.