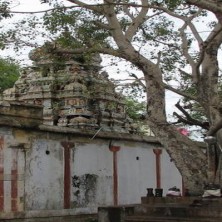 The name 'Aappudaiyaar' is from the word 'Aappu' meaning, a wedge, that was unintentionally worshipped as a Shivalingam by a Pandya ruler and which transformed miraculously into a lingam. The Lord is also believed to have miraculously caused grains of sand to turn into rice during the time of a famine, hence also came to be known as Anna Lingeswarar. The Goddess is known as Sri Kuravankamazhum Kuzhalammai

This temple was constructed in the shadow of Madurai Meenakshi Sundareswarar temple from contributions made by the Pandya Kings  and little else is known of its history but is regarded as the second important of the Tevara Stalams in this region of Tamilnadu.