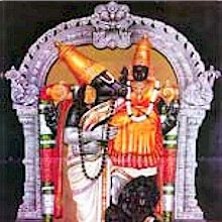 Sage Kuni and his daughter performed penance seeking the blessings of Lord Narayana. Kuni alone reached heaven but not the daughter.  Maharshi Narada advised the young girl that she should marrty of she wanted to reach heaven.Kalava Maharshi married her and they had 360 female children.  He performed penance begging the lord to marry his daughters.  A brahmmachari came along one day saying that he was on a Divyadesa Yatra.  As he was very handsome the sage requested him to marry his daughters.  He agreed and married one each day.  On the last day, he revealed his true self. He was the Lord in the form of Varaha.  He fused all the daughters into one and had them on His left lap.  As Perumal had them together in one form on His Left Lap (left in Tamil is Idam) the place came to be known as Tiruvidavendhai which later came to be called Tiruvidandhai.

Women with delays and problems in marriage offer worship here as it is believed that the Lord will bless them with a suitable spouse.