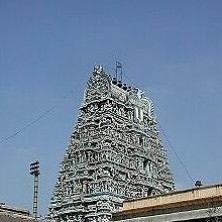 There are five shrines here. The primary sanctum enshrines Venkatakrishnan with Rukmini, Balaraman, Satyaki, Anirudha, Pradyumna - in a standing posture facing east. The Utsavar here is Parthasarathy. Scars from arrows sent from Bheeshma's bow, borne by Krishna, are seen on the image of Krishna. There is a shrine to Ranganathar in a reclining posture(his consort is Vedavalli) in a separate sanctum. There is a shrine to Rama in a standing posture, flanked by Sita, Lakshmana, Bharata, Shatrugna and Hanuman facing east. There is also a shrine to Varadarajan mounted on Garuda facing east. There is also a shrine to Narasimhar in a seated posture facing west. Apart from these, there is a separate shrine for Andal. This is the only shrine among the 108 Divya Desams, where Krishna is seen enshrined with images of his family.

The presiding deity of this temple is Sri Venkata Krishna swamy. This deity is also called Geeta Charya with a conch in his right hand and the Gnana Mudra, (indication of knowledge) pointing to his holy feet signifying the highest idol of teaching, the essence of the Geetha.

It is believed that Venkateswara of Tirupati manifested himself as Parthasarathy here, and hence the name Venkatakrishnan. This shrine is considered equivalent to Tirupati, and Saturdays in the month of Purattasi are considered sacred here.

By whom and when the temple has been actually built is not known, but it is said the have been renovated by a King of the Pallava dynasty. There is a separate shrine within the main shrine for Sri Ranganatha, who is reposing on the Adi Sesha facing east and with his consort and with Brahma in the navel. All the alwars and Acharya of Sri Vaishnava sampradaya are installed in the temple with their respective utsava images. Separate shrines are built for Perialwar and Namalwar outside the temple and Thirumazhisai alwar inside the temple. The temple is also famous for the tank in front of it known as Kairavani.