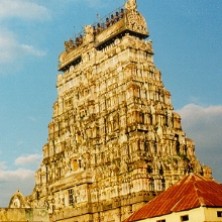 Chidambaram is hallowed by the aura of the famous shrine dedicated to Lord Shiva as Nataraja, the Cosmic Dancer. Here the Lord danced while blessing saints Patanjali and Vyagrapada, who were doing penance in the Thillai forests. The Cosmic Dance is a symbolic representation of the five-fold activities of God - Creation, Preservation, Destruction, Veiling (Maya) and Blessing. Sri Nataraja's Thandavams include Ananda Thandavam, Urdhwa Thandavam, Bhujanagatrasa Thandavam and Ajabha Thandavam. To the left is the Chidambara Rahasyam or the abode of akasha Lingam. Only a Prabha or circular arch and a Vel (spear) with a golden Bilva mala are worshipped. This is one of the Pancha Bhutha Lingams representing Akasha or Ether. This shrine remains curtained. The five silver-plated steps leading to the shrine represent the mystic five letters of Namasivaya. The shirne of Govindaraja Perumal is close to the Chit Sabha. Lord Subramanya is in another shrine. The temple has all five Sabhas of Lord Shiva - Chit Sabha, Kanaga Sabha, Nritya Sabha, Deva Sabha and Raja Sabha. The famous Raja Sabha is in the Thousand-pillared Hall. Saivite poet Sekkizhar first recited his Periya Puranam in this hall. The Nritya Sabha shows the Urdhwa Thandavam of the Lord. It is a porch of 56 pillars, delicately carved with dancing figures. This court represents a heavenly chariot carved out of stone. The Deva Sabha was used by the ten administrators to hold meetings and festivals. The Raja Sabha was used by Chola and Pandya kings to hold victory celebrations.