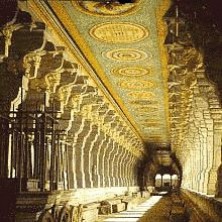 This major pilgrim centre in South India is closely associated with Ramayana. It is also the seat of one of the 12 Jyotirlingas. The devout considers a pilgrimage to Kashi incomplete unless he or she visits Rameswaram also and performs abhisheka for Sri Ramanatha with Ganga water. The temple, situated on an island in the Gulf of Mannar, reflects divinity in serenity. It is a massive structure having a majestic gopuram and a 1200-metre-long corridor, the longest of such temple corridors in India. The shrine of Parvathavardhini, consort of Sri Ramanatha, is to the right of Rama Lingam. A Sri Chakra can be seen here. There is a separate Vishnu shrine dedicated to Sethu Madhava. There are shrines for Pallikonda Perumal, Santhana Ganapathi, Ashta Lakshmi, Nataraja and Hanuman.