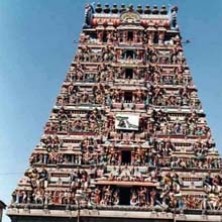 According to a legend, Lord Siva once pinched off one of the heads of Brahma to arrest his pride. A crestfallen Brahma came to this place, installed a Siva Lingam and did penance. The Lingam is known as Kapaleeswarar. His consort is Karpagavalli. Devi Parvati did penance here as a peahen the place is known as Mylapore. Saivite saint Gnanasambandhar sang in praise of Lord Siva in this temple to revive a dead girl. During the Arupathumoovar festival in March in honour of the 63 Nayanmars, their images are taken out in a spectacular procession.