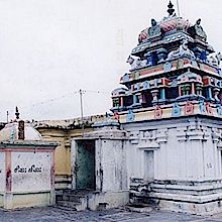 The Navagraha Sthalam is called Kailasanathar Temple and has a shrine for Lord Chandran,the moon,and is located in Tingaloor about 8Km from Tiruvaiyaru near Thanjavur in Tamilnadu. This ancient Saivite shrine is associated with Appoodi Adigal a resident of the village who was devoted to Tirunavukkarasar one of the 63 Nayanmars (saivite saints). Appoodi Adigal who worshipped Tirunavukkarasar had an opportunity to host the saint when he visited Tingaloor. As the saint prepared to eat Apoodhi Adigal's son was bitten by a snake and died. However,Apoodhi Adigal continued to serve the saint without revealing the tragedy that had befallen the family.The saint was moved by his devotion and is said to have restored the boys life by singing songs in praise of Lord shiva at the Thingaloor temple.This collection of ten songs came to be known as "Thirupathikam". In the months of Puratasi (September - October) and Panguni (March-April), Moon's rays are said to fall on the Lingam.