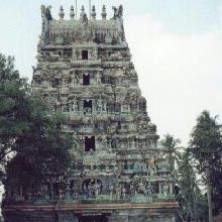 Suryanar Koil is located about 1Km from Tirumangalakkudi which lies between Kumbakkonam and Mayavaram in Tamilnadu. This temple is dedicated to the Sun God and also includes shrines for the other eight celestial bodies. It is in close proximity to the Shivastalams of Tirumangalakkudi and Kanjanur (Sukrasthalam). Though there are shrines for Lord Surya in many temples this is the only temple dedicated exclusively to the Lord. In the sanctum, Brihaspati(Guru) is depicted as performing puja to Lord Suryanarayana. The temple was was built by the Chola kings.The temple faces the west. The presiding deity is Suryanarayana. There are shrines to Kasi Vishwanath, Visalakshi and Brihaspati(Guru) within the sanctum while shrines for the other celestial bodies are located outside.The Kol Theertha Vinayakar shrine is considered very important.
Significance
Malefic effects due to Dasa bukthi and gochara will be nullified by worshipping here. Also, obstacles and hardship due to Sade Sathi, Ashtama Shani and Janma Shani will be resolved by offering worship at the temple for two months.
Presiding deity: Sri Suryanarayanaswamy
Consorts: Sri Usha Devi, Sri Pratyusha Devi