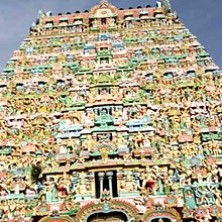 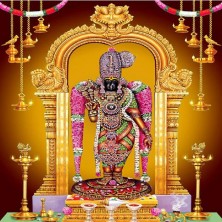 The temple city of Madurai has retained the essential culture of yore. The history of Madurai dates back to the 6th century BC. It was the capital of the Pandyan Empire till  14th century AD. Madurai was the seat of Tamil learning. It is a twin temple dedicated to Sundareswarar and His consort Meenakshi.

According to legend,  the sacred Swayambulingam discovered by Lord Indra at Kadambavanam was later enshrined by him in  Madurai. The fact that the Lord is seen on the vehicle of Indira in this temple is said to be proof  for this.

The temple was almost completely destroyed in  the year 1310 following the invasion of  the Islamic conqueror Malik Kafur, one of the generals of Allaudin Khilji. The invaders destroyed most of the ancient sculptures of the temple.

Thirugnanasambandar the Hindu Saint has mentioned this temple in his songs which date back to the early 7th century.  The Lord has been described  as Alavai Iraivan in his songs.The temple was restored to its pristine glory in the late 14th century when Hindu Kings regained power in Madurai. This can also be termed as the beginning  of a new era in the history of the temple, when it was almost rebuilt.King Thirumalai Naicker played an important role in the construction of the new form of the temple.

There are 11 gopurams, the most attractive of them being the one at the southern entrance rising to a height of 160 feet with a parabolic curve. Madurai is one of the 51 Shakti Peetams. The Golden Lotus Tank inside the temple is surrounded by spacious corridors, the walls of which are covered with paintings depicting the Lord's miracles. The long rows of pillars here contain delivately-carved figures. In the sanctum, the Goddess stands with a parrot and bouquet, radiating love and compassion. A large image of Ganesha greets the pilgrims as they proceed to the Sundareswarar shrine. In front of the shrine is the famous Kampathadi Mandapam. This contains many finely sculptured pillars, including one depicting the siding of Meenakshi. The beautiful figures of Siva, incarnations of Vishnu and other statues are striking illustrations of exclence of Dravidian art.

The service has been temporarily suspended. Please contact helpdesk@saranam.com for further information