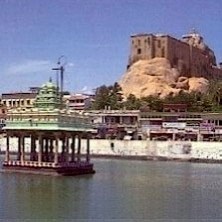 This shrine was built by the great Pallava king Mahendravarman in the ninth century A.D. This cave temple has the sculpture of Shiva, Parvati and a personification of Cauvery. The matted locks of Shiva are shown bearing the torrents of Ganga. The edict in the temple says that the scene depicts Parvati pleading with Shiva not to dally with Cauvery as she belonged to Mahendravarman. Parvati, it is said, was apprehensive of Shiva's fondness for rivers after his encounter with the tempestuous Ganga. The deity Pillayar is decked in sandal paste and his eyes are penetrating. There is a pit on the top of his forehead, believed to have been created when Vibhishana rapped him on the head in anger.