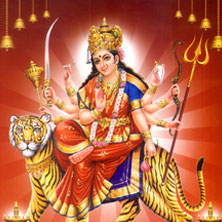 Navratri
Navratri is a Hindu festival of worship and dance. The word Navaratri literally means nine nights in Sanskrit; Nava meaning Nine and Ratri meaning nights. During these nine nights and ten days, nine forms of Shakti/Devi i.e. the female aspect of divinity are worshipped.

Significance
The beginning of spring and the beginning of autumn are two very important junctions of climatic and solar influence. These two periods are taken as sacred opportunities for the worship of the Divine Mother. The dates of the festival are determined according to the lunar calendar.Dasaharara, meaning 'ten days', becomes dasara in popular parlance. The Navaratri festival or 'nine day festival' becomes 'ten days festival' with the addition of the last day, Vijaya-dasami which is its culmination. On all these ten days, Mother Mahisasura-mardini (Durga) is worshipped with fervour and devotion.

Traditions of Navaratri
There are five Navaratris devoted to the worship of Shakti (Parvati or Durga). Out of these only three are being celebrated now.

Sharada Navaratri
This is the Navaratri, which is celebrated during Sharad Ritu (beginning of winter) (Sept-Oct). This is also called Maha Navaratri. Sharada became Sharad in some places. This celebrates the slaying of Mahishasura by Durga. The festival is observed in most parts of India - especially in the East.

Vasant Navaratri
This is celebrated during Vasant Ritu (beginning of summer) (March- April). This Navaratri is celebrated in North India. Vaishno Devi temple in Jammu observes Navaratri during this period.

Ashada Navaratri
This Navaratri is particularly important for all Upasakas of Varahi- Celebrated in July-August. This is called Guhya Navaratri in Himachal Pradesh. Varahi is one of the seven Matrikas of Devi Mahatmya

Sharad Navaratri
Commences on the first and ends on the tenth day of the bright half of the lunar month Aswayuja/Asvina.

Vasantha Navaratri
This is celebrated during Vasantha Ruthu (beginning of summer) (March- April). This is also known as Chaitra navaratri as it falls during the lunar month of Chithra.

Rituals
The Navratri commences on the first day (pratipada) of the bright fortnight of the lunar month of Ashwin. The festival is celebrated for nine nights once every year during the beginning of October, although as the dates of the festival are determined according to the lunar calendar, the festival may be held for a day more or a day less.
Navaratri is celebrated in different ways throughout India. In North India, all three Navratris are celebrated with much fervor by fasting on all nine days and worshipping the Goddess Parvati in her different forms. The Chaitra Navratri culmintes in Ram Navami and the Sharad Navratri culminates in Durga Puja and Dussehra. The Dussehra of Kulu in Himachal Pradesh is particularly famous in the North.In the South Indian states of Tamil Nadu & Karnataka, Sharad Navratri is celebrated by setting up of Golu (pronounced as Golu or Kolu). It is believed that this was a means to invite people home to celebrate the festivities with them. In Karanataka, particularly Mysore on the 10th day the enacting of destruction of evil (Ravana destroyed by Rama) is displayed with the lighting of dolls representing Ravana and forces of evil.The last four days of Sharad Navratri take on a particularly dramatic form in the state of West Bengal in East India where they are celebrated as Durga Puja. This is the biggest festival of the year in this state. Exquisitely crafted and decorated life-size clay idols of the Goddess Durga depicting her slaying the demon Mahisasura are set up in temples and other places. These idols are then worshipped for five days and immersed in the river on the fifth day.In West India, Sharad Navratri is celebrated with the famous Garba dance.Navratri is divided into sets of three days to adore three different aspects of the supreme goddess or goddesses.

First three days
The goddess is invoked as a spiritual force called Durga also known as kali in order to destroy all our impurities, vices and defects.
Second three days
The Mother is adored as a giver of spiritual wealth, Lakshmi, who is considered to have the power of bestowing on her devotees inexhaustible wealth. She is the goddess of wealth.
Final three days
The final set of three days is spent in worshipping the goddess of wisdom, Saraswati. In order to have all-round success in life, believers seek the blessings of all three aspects of the divine femininity, hence the nine nights of worship.

In South India, Saraswathi pooja is performed on the 7th day. Eight day is traditionally Durgashtami which is big in Bengal. The 9th day is Ayudha Pooja when everyone gives their tools of the trade -- pens, machinery, books, automobiles, school work, etc. a rest and ritually worships them. They start afresh from the next day, the 10th day which is considered as 'Vijaya Dashami'. Many teachers/Schools in south India start teaching Kindergarten children from that day onwards. Students also pay homage to their respective teachers as they are considered the third god (Maathaa, Pitha, Guru, Daivam - Mother, Father, Teacher & God). On this tenth day of Navratri in October - the holiday of Dussehra or Dasara, an effigy of Ravana is burnt to celebrate the victory of good (Rama) over evil.During Navratri, some devotees of Durga observe a fast and prayers are offered for the protection of health and prosperity.

A period of introspection and purification, Navratri is traditionally an auspicious and religious time for starting new ventures.During this vowed religious observance, a pot is installed (ghatasthapana) at a sanctified place at home. A lamp is kept lit in the pot for nine days. The pot symbolizes the universe. The uninterrupted lit lamp is the medium through which we worship the effulgent Adishakti, i.e. Sree Durgadevi. During Navratri, the principle of Sree Durgadevi is more active in the atmosphere. Navratri is celebrated in a large number of Indian communities. The mother goddess is said to appear in 9 forms, and each one is worshipped for a day. These nine forms signify various traits that the goddess influences us with. The Devi Mahatmya and other texts invoking the Goddess who vanquished demons are cited.

PARTICIPATE IN THE NAVRATRI HOMAMS