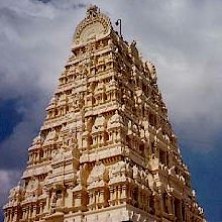 This is one of the three important Shakti Peetams, the other two being Madurai and Kasi. The sanctum faces the Gayatri Mandapam. The beautiful deity of the Devi is in the Padmasana posture, holding a bow of sugarcane and arrows of flowers. She is worshipped as Rajarajeshwari, Maha Tripurasundari and Lalitha Kameswari. Legend has it that the Goddess appeared through the great concavity called Bilakasa to save the Devas from Asuras. The Kamakoti Peetam or Sri Chakram, established by Sri Adi Sankara, is in front of the Goddess and all pujas are offered to this. There are separate shrines for Adi Sandkara and sage Durvasa, a Devi Upasaka. During festival processions, the Devi idol is taken out only after formally seeking Adi Sankara's permission. This is in fulfilment of a divine promise. Kamakshi being the principal Goddess in Kanchipuram, the Siva temples here have no separate sanctum for Shakti.