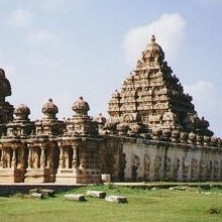 Built by Pallava king Rajasimha, this Siva temple is known for beautiful sculptures. The image of Ardhanareeswara, seated on a bull with the feminine aspect carying a veena, is noteworthy. Other important shrines in Siva Kanchi include Kachapeswara temple, where Siva appears as being worshipped by vishnu in the form of a tortoise Chitragupta temple, the only one of its kind in the South Kumara Kottam, a popular temple of Sri Subramanya Satyavgrateswara and Agastiswara shrines.