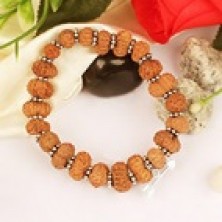 14 mukhi Rudraksha is the most precious divine gem - Deva Mani. It is ruled by the mighty Hanuman. Infuses wearer with a strong will, divine intuition and the courage to overcome all odds. The wearer walks on the path of excellence, victory and success.

Lord Hanuman is considered to be an incarnation of Lord Shiva. Shri Hanuman is the epitome of sincere devotion and dedication, being a great disciple of Lord Rama. Conceptually, Hanuman is the personification of complete mastery of Senses. Rama is the perfect Purusha and Hanuman is always available at His command. It is complete control of senses that infuses wearer with Siddhis and awakens the Third eye of enlightenment.

The mighty Hanuman Rules Planet Mars and is also worshipped for pacifying Saturn. In Ramayana it is mentioned that Hanuman saved the nine planets during the war from the clutches of King Raavana. And as a favor for saving them, the planets blessed Lord Hanuman by saying that any malefic effects of the 9 planets can be averted by praying to Lord Hanuman alone.