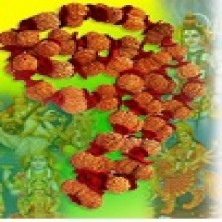 
This very powerful Kantha is made up highest grade Nepal Gauri Shankar beads of size approx 32 to 35mm. Gauri Shankar rudraksha is the Unified form of Shiva & Shakti represented by two naturally joined rudraksha. It opens up the Hrit Padma chakra and attracts peace, harmony and abundance in the wearer's life. Hrit Padma chakra is the spiritual heart which is the abode of Goddess Mahalaxmi. It is variously described as a lotus with 8, 16, or 1000 petals, being golden, red, or white of colour; inside of the lotus there are circular regions of sun, moon, and fire and in the centre of the Chakra, there are a whishing-tree (kalpavriksha), a throne consisting of Matrika letters (symbolizing the spiritual heart of the aspirant) on which he/she should place his or her Ishtadevata in meditation, and an altar.

Gauri Shankar which is the Unison of Male (Yang) SHiva and female (Ying) Shakti is the most powerful Rudraksha for spiritual wholeness. According to ancient philosophy, the entire universe is a manifestation of pure consciousness. In manifesting the universe, this pure consciousness seems to become divided into two poles or aspects, neither of which can exist without the other. One aspect retains a static quality and remains identified with unmanifest consciousness. In Tantra this quality is called Shiva, and is conceptualized as masculine. The other part of this polarity is a dynamic, energetic, or creative aspect that is called Shakti, the great mother of the universe, for it is from her that all is born.

It is in the heart center that the union of the female and male (Yin/Yang) energies takes place. In other words, when the two opposite and complementary energies within each one of us occurs, then Cosmic Consciousness awakens in the ego of a seeker, the bud becomes a rose and unfolds the quality of unconditional love in his/her mystical heart. Puranas state that wearer of 32 beads of Gauri Shankar becomes Lord Shiva Incarnate. Most popular Kantha worn by holy Saints and Gurus of India.