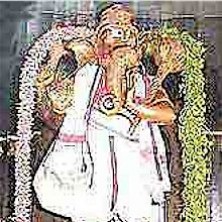 The very conception of the fusion of Vinayaka and Anjaneya forms in One icon has a great esoteric significance. It is fortified by the truth of the to quoted adage - begin with Pillayar and end up with Anjaneya, being dinned at the ears of people more often than not. The unique sight of the amalgamation of two potent and highly worshipful deities invariably sends such thrills in the spines of the viewers that they raise their hands in veneration unknown to themselves. Needless to emphasise, that prayers offered to this archamurti fetches double benefits, like two flowers obtained at a single pick. This rarity is found in the newly built temple at Madhya Kailas, located in a sequestered corner of Adayar, one of the posh localities of the metropolitan Chennai. This enchanting icon with two well sculptured faces is about five feet in height and faces north. The enlightened builders, as the word goes here, did enough research to fashion the icon thus, and are vociferous in publishing to the world the glory of this Lord through several episodes and adagcs. Desires get fulfilled, and particularly education attains fruition, if this Lord's grace is invoked with proper devotion. Moreover, worshippers are relieved from the clutches of Navagrahas. The principal deity of this tastefully built modern temple is Ananda Vinayakar and he is set up in a well built shrine facing east. There are as many as eight grandly built mini-shrines around the sannidhi in the campus installed with several divinities, like Anjaneya, Maheswar, Adithya, Adtyantha Prabhu, Mahavishnu, Durga, Navagrahas, Mother Parvathi, Swarna Bhairava etc. Nityanaimithika worship is offered with great devotional fervour. Above all, the temple has built up new traditions of performing pitrukarma and annadana, the most humanitarian services for the benefit of Orthodox community. In addition, it is assisting institutions involved in rendering commendable social service through their highly laudable projects like running orphanages, refuge camps, asylums, hospitals etc. On the whole, this temple though emerged recently has on its record glorious achievements unknown and undreamed of by many shrines existing for over several centuries. It is a miss-not shrine to be included in the itinerary list of visitors of this great city.